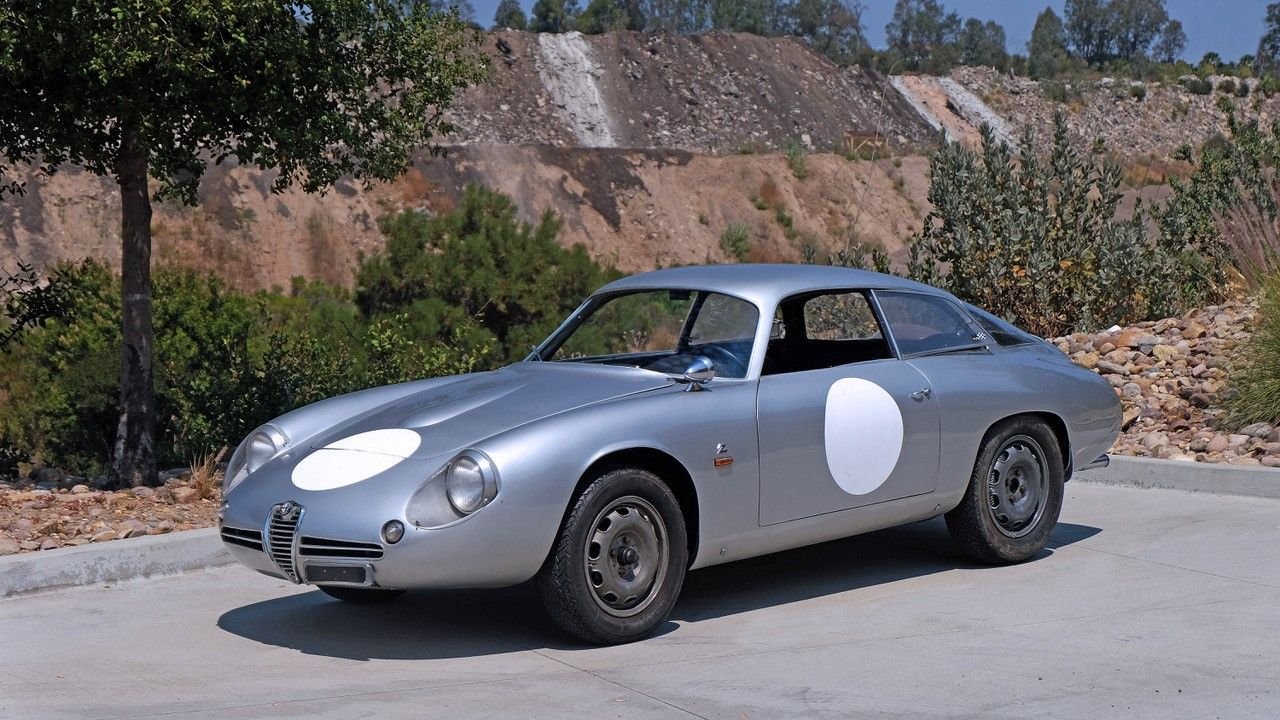 Vehicle Specifications
Stock No:
829
Year:
1962
Make:
Alfa Romeo
Model:
SZ2
Engine No:
VIN:
AR1012600181
Exterior Color:
Interior Color:
Mileage:
Contact Us
Thank you for your interest! We'll get back to you soon!

Alfa Romeo Giulietta Sprint Veloce Zagato “SZ2 Coda Tronca” Background:
Initially Carrozzeria Zagato would convert for clients, Alfa Romeo Sprint Veloce models into lightweight racers. These were given the designation Sprint Veloce Zagato or SVZ for short. An agreement was soon reached between Alfa Romeo and Zagato and a total of 200 (Tipo 101.26) Giulietta Sprint Zagato (SZ) models, which are now referred to as “Round Tail” examples were built from 1957 to 1961. Zagato then dramatically cleaned up the car's aerodynamics and completed another 30 "Coda Tronca" or “Clipped Tail SZ2” versions from 1960 to 1963. The original “round tail” design for the SZ was becoming dated and suffered from both high speed stability and limited top speed. Zagato addressed this starting in 1960 with a significantly redesigned, long-tail variant with “Kamm” tail that was far more aerodynamically clean and considerably more stable at higher speeds.

Other than the coachwork variations, both were mechanically identical using the same highly tuned 100bhp engines and then an improved 116bhp unit. The improved aerodynamics of the “SZ2" allowed a significant increase in top speed and overall better handling. The SZ2 also benefited from better braking and a lighter front end, as it now used improved front disc brakes rather than the SZ four-wheel drum brakes.

There are two distinct variations of the SZ2. Early examples have beautifully sculptured “covered headlights” while the majority of the later examples all had more upright “open headlights.” This particular example is one of the more rare and attractive first versions with the beautiful “covered” headings.

Beginning with this specific example Alfa Romeo, via the race preparer, Conrero offered a modified version for endurance racing. These included the following known examples:

Cornero modified these examples with an external fuel filling cap and tube passing through the body work at the rear or on the right rear fender. This allowed far easier and quicker fillings as the stock set up that had a small gas cap inside the trunk area. Conrero also fitted these endurance racing examples with massive, oversized fuel tanks that could now carry an astounding 80-liters (21 gallons.)

Conrero also installed a set of supplemental Marshal driving lights on the nose. A further modification as found on s/n 00181 was the fitting of a special lower final drive ratio that would add an extra 14 kilometers to the top speed in every gear as well as a special intake plenum for the carefully tuned Weber 40 DCOE 2 carburetors.

The stock Alfa Romeo SVZ was able to produce 100 and later 116bhp @ 6,000rpm. The specially prepared Cornrero endurance racing version produced 126bhp at 7,500 rpm. As a result of the improved aerodynamics of the SVZ2 “Coda Tronca” coachwork, taller final drive ratio and “hot-rod” engine set up, top speed rose from 103mph / 166kph to and incredible 139mph / 225kph! This was confirmed in the April 1963 practice sessions for the 24 Hours of Le Mans were a Conrero prepared SVZ2 was clocked on the Mulsane straight at 223kph / 138.5mph!

Here are Conrero's speed tables in each gear at 7,500rpm:

Despite these impressive figures, for the actual June 1963 running of the 24 Hour of Le Mans, all three SZ2s that were entered were temporarily fitted with 1600cc engines, all three of which failed to finish with none of them covering sufficient distance to qualify as finishing the race. After Le mans, s/n ★00181★ was fitted back with its original 1300cc engine which remains still fitted to the car today.

AR10126★00181★ Individual History:
This particular Alfa SZ2 was the first of five special prepared endurance racing examples prepared by Conrero. After delivery in the Spring of 1962, the original owner, Armand Schäfer entered his new Alfa in a series of races, rallies and hill climbs under his team banner “Ecurie La Meute” which literals translates to “The Pack Stable.”

In 1963, he joined the newly formed Scuderia Filipinetti who arranged for entries and support for the remainder of all his races. While the Scuderi Filipinetti entered, transported and supported Schäfer at his races, maintenance and tuning of the car was handled directly by Schäfer's friend Virgilio Conrero himself.

The Scuderia Filipinetti was a Swiss motor racing team that competed in sports car and Formula One racing from 1962 to 1973. It had been founded by gentleman racer and businessman, Georges Filipinetti and for a decade, fielded some of the best drivers and best prepared race cars to ever hit the track. Sadly Filipinetti passed away in 1973 and the organization disbanded with the passing of its patron.

Motore Conrero was founded by Virgilio Conrero on the outskirts of Turin, Italy. His garage became most famous for their highly-tuned, racing Alfa Romeos in the 1950s. He and his engineers were famous for being able to take the best and fastest cars Alfa Romeo could build and making them faster. His services were as such in great demand and it was most fortunate that Schäfer befriended Conrero.

Schäfer initially achieved no signifiant results but gained valuable experience. However with direct support from both the Scuderia Filipinetti and Virgilio Conrero, Schäfer would enter his most successful racing period. In the span of less than two years, he completed in the following races:

At the Tour de France, which was run over a eight-day period, beginning on September 14th and ending on September 22nd, Schäfer and Casaro competed in seven individual races with the following results:

At the end of the 1963 season, this Alfa ws returned for winter storage with the Scuderia Filipinetti. Schäfer never again raced this Alfa Romeo and at some point, rather than paying storage for a vehicle he was not using, sold it to the Scuderia Filipinetti. They intern sold the car to Daniel Staudhammer, another Geneva resident. According to Filipinetti records, Staudhammer never raced the car and appears to have actually only taken it out on the road once during his ownership. In 1969, he sold the car to enthusiast and motoring collector, Mario Campana another local Geneva resident. The car would remain with Compana, as last raced in 1963 at the Tour de France until after two years of pestering and negotiating, he finally agreed to sell the car to his neighbor, Henri Worm. Worm finally got delivery of his treasured Alfa Romeo in 1982 and it would remain with him until our recent purchase earlier this year.

While most of the other Alfa Romeo SVZ, SZ and SZ2 models built continued to race well past their prime and often into ruin, this particular example survived its period race days unscathed, a rare occurrence, as today very, very few original examples survive. Today, this Alfa Romeo remains an incredibly original example still fitted with its original engine and all other numbered components as delivered new in the Spring of 1962.

It is interesting to note that all of the owners of this Alfa Romeo were all from Geneva and except to travel to various races, this Alfa Romeo has always resided there since new until our recent purchase.

AR10126★00181★ Today:
After this Alfa Romeo's last race, the 1963 Tour de France, Schäfer returned the car to the Scuderia Filipinetti for winter storage. Almost no one knew what happened to this Alfa after its last race. Schäfer never raced the car again and most historians thought that like many others, the car was broken up for spares. In fact the car remained exactly as last raced when Schäfer agreed to sell it to the Scuderia Filipinetti rather than continue paying then to store it. The car was sold in 1967 and it would remain stored with the Scuderia Filipinetti until 1969. During its hibernation which Filipinetti, it was purchased later in 1967 by Daniel Staudhammer another resident of Geneva. Staudhammer registered the car but never raced it and rarely drove it, in fact it is believed he only took it out on the road one time during his ownership.

This Alfa remained essentially as last raced in the Tour de France in 1963 when it was sold in 1969 to Mario Compana, another Geneva resident. Compana is believed to have done nothing with it other than store it. In 1980, another Geneva resident and acquaintance of the original owner, Armand Schäfer, tracked the car down and began to negotiate a purchase of the car in hopes of returning it to the original delivery livery as he had first seen it racing as a younger man in 1962. Two years later, in 1982, Mr. Henry Worm was able to purchase this Alfa Romeo and he then began a restoration that would last nearly a decade. Worm kept meticulous hand written, “long-hand” notes in a diary of everything he did to the car as well as every kilometer he drove it. During his near 40 years of ownership, he rarely showed the car to anyone and drove it less than 10,000 kilometers and only approximately 500 kilometers since a complete rebuild of the engine, gearbox, rear axle, suspension and brakes.

In July of this year, we were able to track the car down with the help of friends in Paris, France. The car had been missing from the "public eye” since 1963 but never actually lost as each owner knew it was an automotive treasure with no equal.

The car was carefully inspected, road-tested and evaluated on July 20th and 21st of this year and confirmed to be completely matching numbers, rust and accident free in the same original delivery configuration as completed by Conrero on December 1st, 1961. A compression test was performed with the following results:

On July 29th, we complete the purchase of this Alfa Romeo along with a variety of spare parts and a massive collection of records and period photos, too extensive to share in this short email.

This Alfa Romeo has just been imported from Switzerland and we have carefully inventoried it and completed thorough inspections. This vehicle has been submitted to www.bringatrailer.com and it has been excepted as an exclusive auction entry. If you would like to be kept updated when the auction goes live, please do not hesitate to let me know. 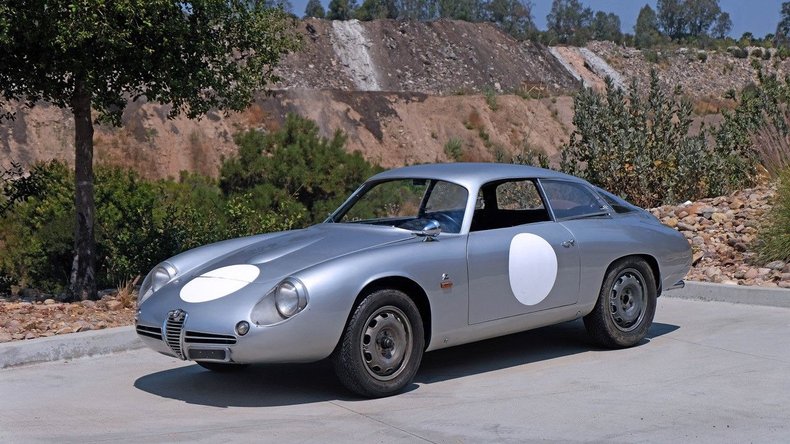 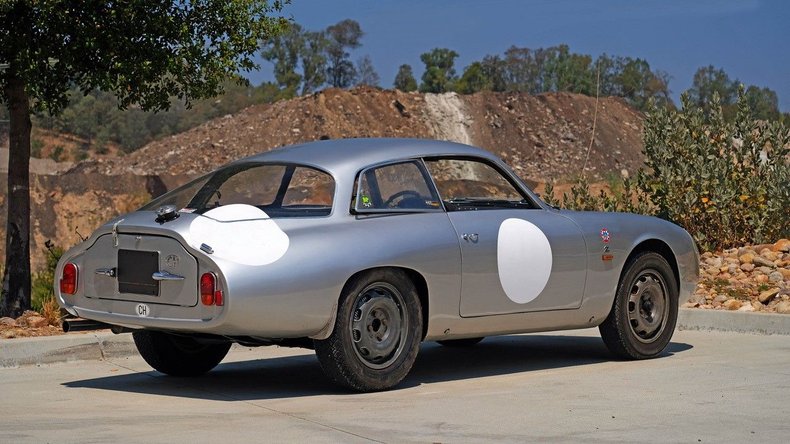